The fine folks at Self Publishing Review put together some Q&A for the authors of “The Hell Bound Kids: Wild In The Streets” and MANSON, Anthony Perconti, and the owner of No Sell Out Productions, Jason Duke, answered.

The Hell Bound Kids 2: The Architect

Below is a video screen capture of the Interactive Fiction RPG we’ve been hard at work on, “The Hell Bound Kids 2: The Architect.”

A follow up to our first book in the HBK series, we decided to do something different than publish another book.

Instead, we created a choose your destiny style game where you’re given different choices that determine your progression and ultimate outcome of the story, and though still largely text-based, we’ve added RPG elements such as Stats, Levels, XP, Hit Points, Skillz, Maps, Weapons, etc. in the game.

There will also be Battle Maps with combat scenarios that you’ll get to play as well.

The combat portion of the game is taking us the longest to finish, but we should have a demo available next month, which will be free to play on our website. Before we release the demo to the general public, however, we plan to offer a first release to selected playtesters, which we’ll put out a call for soon. So if you’re interested in being a playtester, keep checking back on our website or Facebook page for the announcement.

An edgy piece of punk brilliance

Co-Authors Manson, Anthony Perconti, Sebastian Vice, and Joe Haward unveil an ominous dystopian world in their novel, The Hell Bound Kids: Wild in the Streets, the first in a longer anarcho-dystopian series.

Populated with childish but street-hardened characters like Ghost, Corpse, Pusho, Mimic and more, this is the story of rugged survival in the face of overwhelming oppression and persecution at the center of Punk City. A once civil society has collapsed into a Kid-filled wasteland of looting, murder, and depravity, with authorities stoking the fires of conflict to keep the gangs at each other’s throats, while the puppetmasters rest comfortably in power.

Read the rest at Self-Publishing Review.

A Life Through Books Interview

What is the hardest part of writing your books?

Self-doubt. Trying to overcome that nagging inner critic. Nothing ever seems good enough for it, and just when I think I do have something good enough to appease the little beast, it wants me to kill the darling.

What songs are most played on your Ipod?

Since I’m pretty eclectic in my taste of music I’ll list bands instead of songs. I’m a country girl turned city girl. So anything country (especially Johnny Cash). But I’ve been a city girl for a spell, got into the 80’s punk scene, so I’m also an old school, head banging, punker chick and love anything punk and heavy metal. Especially Sex Pistols, The Ramones, Siouxsie and the Banshees, The Clash, Blondie, Talking Heads, Slayer, Metallica, Slipknot. I like oldies like The Animals and Johnny Ace and Pink Floyd. Also like Hip Hop and Gangsta, like Brotha Lynch, Wu-Tang, Cypress Hill, and Eazy-E.

Do you have critique partners or beta readers?

Oh sugar I have a hard enough time fighting the little monster critic in me and trusting in myself than to put faith in beta readers. Though I suppose the fine folk at No Sell Out Productions could be considered my critique partners when I work with them on my manuscripts. Their editors have been top notch to work with.

What book are you reading now?

The Book of Job.

How did you start your writing career?

With a lot of prayer. As much as I’m filled with self-doubt, I’m also a gal of great faith and belief that helps get me through the doubt, like a doubting Thomas. But I suppose it all started as a reader. I love reading horror, crime, and dark fantasy, and researching the occult. It presented me with what I felt were really great insights, ideas, and possibilities, that I began writing down and expanding on into stories and then of course full novels.

Tell us about your next release.

My next release will be the second book in The Hell Bound Kids series, tentatively titled “Beneath The Nightmare City” which picks up immediately where the first book leaves off. And I’m currently hard at work on the third book in the series. 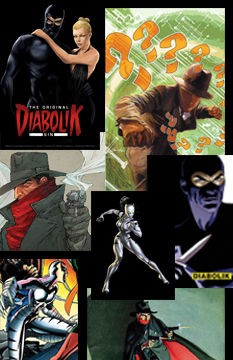