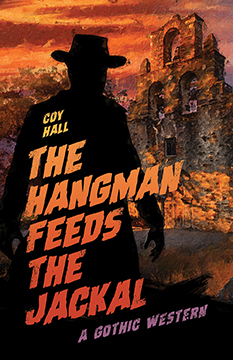 Subtitled A Gothic Western, Coy Hall’s novel The Hangman Feeds the Jackal immediately brings to mind the 1974 classic, Richard Brautigan’s TheHawkline Monster. Both books fall squarely within the Western genre, but where Brautigan amplifies elements of the (weird) gothic, Professor Hall focuses the macabre. One zigs, where the other zags. One could argue that The Hawkline Monster is a proto-Weird Western, in the tradition of Joe R. Lansdale’s Reverend Mercer stories. The Hangman Feeds the Jackal in my view, has more in common with Scott Phillips’ 2004 offering, Cottonwood, than Dead in the West. There is nothing overtly supernatural in Professor Hall’s novel: the elements of the macabre are perpetrated by human beings. This Western concerns itself with evil, to be sure, but it is the evil that men do, which makes it all the more disturbing.

Elijah Valero, who has appeared in three short stories, is the protagonist of The Hangman Feeds the Jackal. In many respects, Valero is a traditional Western lead: he is a gunfighter and quite a deadly one. His reputation precedes him, wherever he goes. However, all is not what it seems. This particular gunfighter suffers from visual and auditory hallucinations that compel him to kill avatars of the ever-relentless Hangman, who takes a myriad of forms and identities. The entity known as The Spider, is Valero’s constant companion and acts as an embodiment of his reptile brain. The Spider is always goading and pushing him to eliminate any potential threats (disguised as the ubiquitous Hangman). Hall portrays Valero as a haunted individual who, during moments of clarity, feels remorse and shame for many of the lives he has taken. Valero’s backstory is parceled out in bits and pieces, throughout the novel, of his tragic relationship with his parents (particularly, his mother). It is in these flashback’s that the true nature of The Hangman is revealed, along with Elijah’s damaged psyche. Hall does an exemplary job of demonstrating that certain individuals become what they are through formative trauma, coupled with hereditary predispositions. The antagonists of The Hangman Feeds the Jackal are a direct counterpoint to Valero’s tortured existence. Spence and Corbin are “gallows followers:” individuals who are infatuated with the act of death (and dying) and have taken their infatuation to its logical conclusion. In modern parlance, they are “thrill-killers.” But as disturbing as these two characters are, their newest associate, the teenager Felix “was an empty husk, capable of no genuine emotion. He was damaged. The boy imitated feelings, but he didn’t experience them.”

Felix Hines’ actions are the catalyst for much of the story’s plot. I am being intentionally vague, but suffice it to say that many macabre elements of The Hangman, hinge upon the teenager’s decision early on. There is also the local legend of the hidden cache of a fortune in silver that works as the tale’s MacGuffin. Hall deploys many traditional Western tropes during the course of the novel: a posse is formed and dispatched, the sheriff of the settlement Bone of Wellington, is well meaning, yet untestedand yes, a damsel is technically in distress (but so is the majority of the settlement). However, Professor Hall allows the reader entry into his character’s heads, adding a nuanced layer of depth (and characterization to boot) absent from many traditional Western yarns.

Professor Hall is a storehouse of information with relation to Italian “trash” cinema. I would contend that the man knows more about Spaghetti Westerns, Gialli and the immortal duo of Bud Spencer and Terrance Hill than your average Italian film school student. To this end, Hall peppers in some nice Easter Eggs (one that I am absolutely sure of and two others that I have a strong suspicion about) for the discerning film buff to ferret out. There is one quote that I would like to end off this review with. Previously I mentioned that The Hangman owes more to Scott Phillips than to Joe R. Lansdale and I still stand by that. However, I believe that there is one other writer that Hall is channeling, albeit quite obliquely. Cosmic horror (and crime writer) grandmaster, Laird Barron. These lines could easily work as a description for Barron’s ever hungry, cosmic entity, Old Leech. “Where she would say that Jesus harbored and welcomed these folks, that they were lucky to have passed, he would say something more malignant had occurred. The world was hostile. The whole universe was malignant and if it targeted you…well, there was no loving god waiting when it caught you…Any god with power was a god of animals and he was a brutal god.” Bravo, Professor Hall. Bravo. So, when does the next installment of the Elijah Valero series drop?

My thanks to Coy Hall and Nosetouch Press for providing me with an advanced reading copy of The Hangman Feeds the Jackal. The release date is June 14, 2022. In the meantime, you can track down these Elijah Valero short stories while you wait. Happy hunting.